Arthur’s Odyssey is a circus infused imagining of a section in the life of Arthur Fenwick, the heir to Fenwick’s department store. It is produced, created and performed by the team behind the wonderful Circus Central – a circus training hub for the community and professionals based in Newcastle Upon Tyne.

At the age of 19 Arthur ran away to join the circus; he lived and performed with this merry band for 6 years, until he got the sad news that his father had died. Now Arthur must return to Fenwick’s department store (be it not quite as we know it) to decide who should take charge of his father’s business. Will it be Miss Saucy the LSD ladling chef, Madame Olaire the perfume selling smelly siren, or the vicious Mr Vindictor measuring his way to the top, not caring who he steps on on his way (sometimes literally). Arthur has to choose by 5pm, or the store will be sold off to the highest bidder but will he make his decision in time?

As we all know, no good circus show is complete without it’s compere and Arthur’s Odyssey is no exception to the rule. We start with a short introduction to the story of Arthur by the ring leader/compere counting down the hours leading up to Arthur’s big decision, which introduces us to the characters of the store as he goes along. I loved the set-up of the show and use of a compere; it really helped bring to life the story but I feel like his role could have been a bit bigger. I would have loved to see more of him, popping up around the audience and having a little more allowance for a physical engagement with the audience, in particular the children who were desperate to get involved.

Arthur’s story truly begins when he runs into the maintenance clowns whilst in the lift on his way to the manager’s office. They are in awe of their new celebrity lift-mate but whilst hilariously cooing over him, the lift gets stuck and they are obliged to try a number of marvellously funny maintenance mishaps to try and free themselves and Arthur from the lift. Once Arthur has resigned himself to the fact that together they have the fixing skills of a badly trained baboon and he could be in there for some time,  he begins to ask them about the staff, in hope that he might hear about someone worthy of running his father’s pride and joy. First we meet Mr Vindictor the tailoring terror- precise to the point of petrifying anyone who dares to measure up wrong. He dazzled and dazed me with his acrobatic rope tricks, keeping “strong and stable” with every move.

We then meet Miss Saucy, the “pig headed” chef serving up all kinds of addictively delicious delights to her customers in Fenwick’s restaurant. We meet along the way her two French waiters and their side splitting set up scene with some very impressive acrobatics for good measure. The waiters’ scene was actually one of my favourites; I really enjoyed the characters and thought they were well physically played.

The guests then arrive to guzzle Miss Saucy’s dish; they begin to eat and cannot stop. Whatever it is, it is highly addictive with some very strange side effects. Soon, even the waiters are munching and the side effects start to send the diners and the waiters mad. I must admit I was a little confused at this point; I have since been put right and told the madness was supposed to be everyone turning into pigs (I think?). This scene is hilarious but could do with a bit more pigginess (a word I have made up for this very review) to clear up any confusion.

Miss Olaire is next on Arthur’s list; she is the head of the perfume department and whisps in on a whiff of wind, men and women alike falling at her feet as she moves towards her silks to entwine herself. She wraps the silk around her body as you imagine she would wrap anyone foolish enough to get too close, around her little finger. Now I must admit when it comes to aerial skills on silks, I am a little biased, as I have attempted to climb silks before and it really is super hard! In this case the performer playing Miss Olaire was fantastic; she made each position and movement look so easy and kept amazing poise and character throughout. 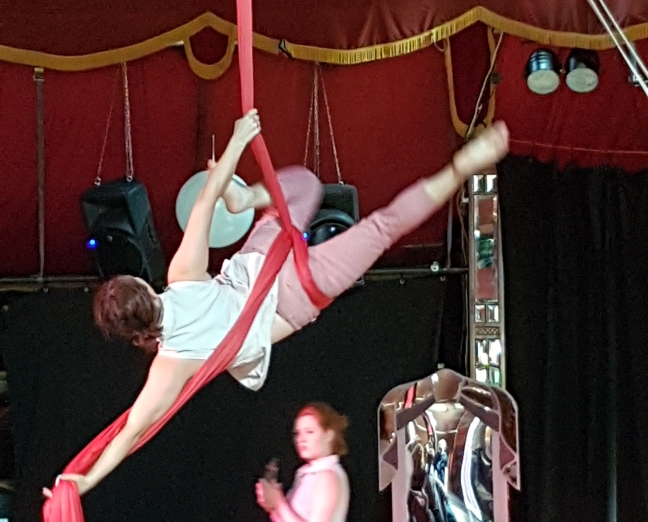 Now Arthur’s list is at an end and he is still no further forward. None of the staff he’s been told about are the type of people trustworthy enough to run his fathers business and he is now running out of time- he is still stuck in a lift with the maintenance crew with no idea what to do. In a bid to distract Arthur they ask about where he has been and a beautiful scene of his years in the circus ensues. At this point I just want to say how lovely the music for the whole show was. There was something in it for everyone- some very well known circus style music but also some music from the composer Yann Tiersen (made famous by the film Amelie) and the German singer Nico, which really floated my boat. It worked perfectly with the show, particularly this scene where Arthur and the cast create his memories of the circus using beautiful puppetry and prop manipulation. This scene really stuck out to me as a highlight within the show as it was a good contrast to the higher energy scenes.

Finally, the lift is fixed by pressing the emergency button (which was there all along of course) and the race is on to get to the manager’s office so that Arthur can make his final decision. A manic dash around ensues; Arthur loses his lift companions and is left in the basement alone with only his thoughts. His fears of who might end up running the store are brought into the physical with some great use of silks and other props from earlier on in the show. 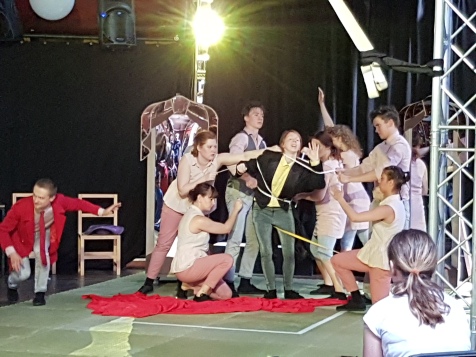 Should he leave his life of happiness and freedom to run the store himself? Or should he let one of the staff take over- Miss Saucy? Mr Vindictor? Miss Olaire? Or should he simply let the store be sold to the highest bidder?

Well, if you want to know you will just have to go and find out for yourself, won’t you?

I came to this show not quite knowing what to expect- a circus, a physical theatre piece, a puppet show? Well it just so happened that it was all this and more. The cast was wonderful and the story was charming, as well as the music used and skill in which everything was put together. I do wish that all main cast members had microphones, as at times it was hard to hear noises and things people said. I also think that although the energy was good, at times it did drop and a bit more consistency and audience participation would really boost that.

However as a show that’s fun for all the family, I would definitely recommend Arthurs Odyssey! It’s such a fun show, which embodies the story and soul of a theatre show and the fun and frolics of a circus.

Arthur’s Odyssey is touring the North East at the moment. For more information on where you can see the next show or if you too fancy running away with the circus, see the Circus Central Facebook page.